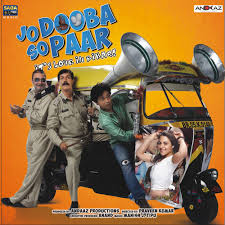 There have been many occasions when I have walked past playgrounds on my way to home. And quite a few times I have been fascinated by the children playing a game of cricket or football. Maybe it reminds me of the good old days or maybe I just need to relax a bit, whatever it is, I just stand and watch the game. For no reason, no entertainment, no gains as such; just killing time. I would not have anything to do at home either, so why not just stand and watch. The game gives me no joy, no fulfillment, serves no purpose and yet I while away my time. Say 15-20 mins or half an hour, not much. That amount of time goes unaccounted for!

Watching this movie, and many other movies in the past, have been of such experience. The movie just goes on and on, like the games that I watch. It fails to entertain, its not meant to leave an impact, its not subject based; its just like passing the ball from one foot to another without scoring a goal.

The players are good, Vinay Pathak, Rajat Kapoor and the promising Anand Tiwari whom I last saw in Aisha. We have a newcomer Sita Spada and quite a few character actors who have played their part ok, but not good enough. The entire team seems uninspired and the slow story telling does not help at all.

The movie is set in Bihar, but it could have been set anywhere. We have a firang, Sita Spada, who wishes to visit Madhubani in Darbhanga, Bihar. The reason for the visit is to study the paintings from that region, as that is a subject of her research. But that’s such a lame excuse for a tourist visit because Sapna, the firang, does not even seem to know about Kali vanquishing a demon under her feet and she hasn’t seen the painting of Lord Shiva before. These things are supposed to be elementary, especially if you want us to believe that someone comes such a long way to do research!

Keshu, played by Anand Tiwari, is son of a truck driver. Some background info on Keshu now. He is rusticated from college because he helped his friends in an exam. The question paper was tough, but he did not help them copy answers. He did the next best thing, he just eased the tension by spreading laughing gas. Second worst use of NO2 in a movie, first worst being Housefull.

The moment Keshu sees Sapna, you know what’s going to happen; the flow of hormones triples in the body. The movie just drags along like a slow push cart, as you know where the cart is heading for. And that’s when two twists occur within a span of 10 minutes. I will tell you about the twist, as I believe that, the twist may push you  into wathcing the movie; else there is no reason. The push cart now wishes to fly like a jet, but not on wooden wheels please!

Firstly, just when Keshu thinks of proposing to Sapna, her boyfriend arrives. Keshu is heart-broken as he watches them smooch. But even before she gets to spend fun time with her boyfriend and even before Keshu starts sulking, Sapna gets kidnapped. The small scale industry in UP-Bihar kicks in, to grab their space on-screen !

What happens next is anybody’s guess, but how it happens, keeps you engaged. The last half of the movie is much better than the first half. With Vinay and Rajat in the starcast, I was hoping for some good comedy and maybe a revival of the ‘Bheja Fry’ times. But no! Vinay Pathak as a drunk hawaldaar who has not had a single permosion in his job, takes up the kidnapping case to redeem himself. And Rajat Kapoor as the ‘unfortunate’ DSP of the district isn’t very good either.

The dialogues are very pedestrian and the movie is predictable in most parts. The only credible bit was the dialect and the lingo; it was consistent and everyone spoke it well. But the biggest problem is with the story telling. The direction is a slack job! The movie could have been better, if they had avoided the cliches and if the writing had been a little better. But, I guess, jo dooba, so dooba.

Posted by crazyrals on November 12, 2011 in bollywood, movie review, movies