Sudden Spurt in US Centric MF’s

I am sure you have observed how most fund houses have a tendency to bring out similar sounding products and MFs with similar themes due to intense competition. So, if one AMC announces Top-200 or Top-100 Fund, then all other AMCs will sooner rather than later, come out with a similar scheme. And this trend is repeated across all funds of all sectors & all market caps.

In the same vein, off-late we have had 2-3 MF’s with US centric funds. The first AMC to start the trend was Franklin Templeton. FT India Feeder Franklin US Opportunities fund was launched in Jan’12 with a view to provide capital appreciation by investing in units of Franklin US Opportunities. So, its basically a Fund-of-Funds which taps into US-based equity and equity based securities.

The current NAV of this fund is Rs.10.72 and its 6-monthly high has been Rs.11.4. This means, currently it is giving a return of 7.2%. But how sustainable is that, in this fluctuating market? When the fund was launched, the timing was such that global markets were doing pretty well for that brief period till Apr’12, and that’s when the 6-monthly high was achieved. But as the markets settled lower, the NAV too fell to Rs.10.5.

In the Manager’s report dated 31-May-12, the overview says that “US equity prices fell in May as US investors were focused primarily on the intensifying European sovereign debt/banking crisis, lower growth in China and various U.S. indicators that have recently worsened”.

Whatever be the reason for poor performance, the truth is that in this globalised world, all markets are inter-related. So, the cause-effect ripples are felt everywhere.

The world has not decoupled and equities across the globe still move in tandem although the degrees vary.

Anyhow, a few weeks ago ICICI Prudential US Bluechip Equity Fund was launched with NAV of Rs.10 and as of today its trading at Rs.10.2. Again the objectives are the same, except for the fact that ICICI would be directly investing in US securities, including ADRs/GDRs issued by foreign companies. They, of course, claim that this will give exposure to Indian investors and provide us with an opportunity to gain from US markets growth as the market capitalisation of stocks listed in NYSE is 12 times more than those listed on BSE.

And this week, DSP has launched the DSP BlackRock US Flexible Equity fund and the NFO closes on 31-Jul. This fund is similar to FT fund discussed above, in the sense that, its a fund-of-funds whereby they would be investing in Blackrock Global funds.

Although these funds may provide investors an opportunity to diversify their portfolio, but the benefit to be drawn out of this is doubtful. In the long-run, as and when the Indian rupee recovers and goes back to levels of being less than 50 rupees conversion for each dollar, it will erase the gains. Also, I believe that growth is more sustainable in Indian markets than US markets. So, if we carefully choose a few midcap and smallcap funds, we will definitely get better returns than US centric funds.

Nevertheless, for the optimistic and enthusiastic investors who believe in American growth story, this may be a good opportunity to dive-in. And since the markets have been bearish for a while now, we maybe in for a good bull run and see good upside rallies in the future.

Posted by crazyrals on August 1, 2012 in mutual fund, personal finance

NFO [New Fund Offer] is always deemed as a risk. Everyone advises you to go for an existing MF, rather than invest in a NFO. One of the reasons being that, the existing funds have performance and past results to go by. But in case of NFO, its a big risk.

But then, investment itself is a risk. Even MFs can turn non-profitable if fund managers don’t do their job well. The kind of analysis we do before buying a MF, we can do a similar analysis of the AMC before investing in the NFO.

I have invested in quite a few NFOs, based on the past performance of the AMC who have managed successful MFs. Also, the asset allocation makes a difference too. As in the case of Sundaram Equity Plus fund where 35% was allocated to gold and rest 65% to equity. That made it an interesting assortment and I leapt towards that NFO. It perfromed pretty well and even touched a high of 11.02, which was a real positive.

Another NFO which turned out well for me was SBI Bluechip Fund [D]. It oaid great dividends in its first few years before the slow down. But then I burnt my finger in SBI PSU Fund.

Another point to note is the timing of the NFO. When you invest in a NFO while the market is bearish, then you will earn profits during bull run. But when you invest in a NFO which is launched during a bull run, taking advantage of rising sensex, then its a sham. It takes away the hard earned money as soon as the bull run dies down. This happened to me with Reliance Small Cap Fund [G]. I got the timing totally wrong.

Anyways, that has not deterred me. Just a few days back I went ahead and invested in two more NFOs. One was the IDBI India Top 100 Equity Fund and the other was Taurus Banking & Financial Services Fund.

The simple reason for this step was to take advantage of the situation where banking stocks have been beaten down and with falling sensex I can look to gain during a bull run. I could have also go in for a Banking Fund from any of the AMCs, but the NAV was quite high. For each unit purchased from existing MF, I can have 5 units here. And then, the %gain would be more or less the same, if they invest in similar banking stocks.

All I can say is, do not stay away from NFOs. The NFOs give us a chance to enter the market at a lower cost and more number of units. But do check on the market status since timing is everything.

Posted by crazyrals on May 11, 2012 in lifestyle, mutual fund, nfo, personal finance

Downside Of Investing In Gold

A rush of gold funds and consistent rise in the price of gold has led people to believe that gold is a great investment tool. But there is a downside to gold investment too. And this downside is with reference to physical gold purchase.

Lots of people buy physical gold in the form of ornaments. Their main purpose of buying jewellery, apart from the social need for displaying it, is that it should provide security at times of crisis. And gold loan is a new fad. But what many people don’t consider is that, not many jewellers or goldsmiths buy back jewellery. And that’s a big negative. So, that kills the liquidity factor.

Even if we have a proper certificate or even if the jewellery is purchased from a branded store or a well known jeweller, people refuse to buy it. Small time jewellers just don’t want to touch and pawn brokers downgrade it and give a very low value for it.

So now, what does one do? At times of crisis, you run from pillar to post but no one buys back the jewellery from you, then where’s the security in buying gold?

Investing in gold is a good thing, but make sure that you buy gold coins. Its much easier to sell away a coin than a jewellery piece. The reason for this is, the ornament sold may not be a design that’s in vogue. The goldsmith may have to melt the jewellery and make different ornaments out of it, so that leads to wastage. Hence, gold coin is preferred.

Gold fund is another option. Since its a fund, you can sell it anytime and get back cash. Even if you sell it within 12 months of purchasing it, you will only suffer an exit load of 1-2%, but at least the liquidity factor remains.

The last option is of course gold loan, in case you want that piece of jewellery back! But if you need that jewellery and love it so much, you would not pawn it in the first place.

Any how, gold investment should be only 10-15% of the portfolio. So, invest wisely in gold.

My Own ‘Capital Protection Oriented Fund’ 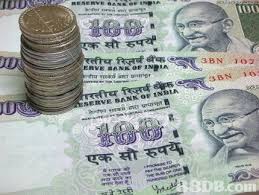 Last year, in March’ 2010, I made the mistake of creating a FD for Rs.100000/-. I did not have time to look into other investment options and blindly went for this option through my ICICI a/c. What was worse is that, the interest rate offered, back then, was 7%. The only clever thing I did was that, I made the FD for 390 days only. So, at the end of the term, sometime in April’ 2011, an amount of Rs.106500/- was credited to my a/c, after deducting TDS etc.

This time around, I had the same option of renewing that FD at about 9.25%; but I decided against it. I made up my mind to create a ‘Capital Protection Oriented Fund’ of my own and test its performance for a period of 1 year. I know it sounds silly, but I did. Its a bit experimental, but all I wish to achieve from it is growth at 12-14%. Here’s what my fund now consists of:

c. The remaining Rs.50000/- I put it in the stock market in the following scrips in a balanced portfolio:

iv. Next Mediaworks(Mid-day Multimedia) – 50 nos @ 5.75 [penny stock purchased so I don’t leave out a single paisa]

I shall keep updating this as and when I do a buy/sell. Suggestions/comments welcome!

Update 1 in Feb-2012: I sold Rajesh Exports @ 136.15, giving me a profit of 2472.05.  I should have sold it earlier, when it had touched a high of 145, but I missed the opportunity as I wasn’t able to track my portfolio during that period. Anyways, I re-invested the amount in buying the following: