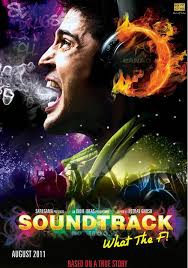 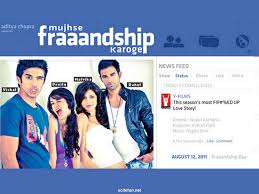 About 9 years ago, in 2002, Yashraj released an out-dated romantic movie garbed as a youthful watch and titled it ‘Mujhse Dosti Karoge’! Of course, no one befriended the movie. Quite the opposite, the audience ran away from the theatres.

The movie had high production value, great starcast, not-so-bad story idea. But damn! gobi ke parathe had more prominence than Hrithik Roshan. The movie was just for TRP (Tina, Raj & Pooja) and their silly banters. I shall spare you the details because I would rather hope that you watch and suffer as I did.

Anyways, the idea of a identity mismatch, especially due to human design and not technical glitch, is an old one. So, Pooja interacts with Raj, using Tina’s email id while Raj presumes its Tina who is showering him with love, care and concern. Raj falls in love with Tina, without knowing that it’s Pooja who should be receiving his attention. It takes about 2.5 hrs and a Uday Chopra to get the entire confusion sorted out. So, that was Dosti  in 2002 when orkut was not in yet or may have been in nascent stages.

In 2011, Dosti mysteriously becomes Fraaandship! And believe me, there is no Punjabi character in the movie except for rockstar Rahul Sareen. Preity is besotted with Rahul and loves the idea of falling in love with him, after the rock concert that she attends.

On the other side of the fence is Vishal who loved Malvika’s peppy nature and the way she flambouyantly stepped on the stage with Rahul and shook a leg. Since Malvika would never fall for someone like him, Vishal uses Rahul’s FB account to send Malvika a friend request. Malvika, of course, thinks that Rahul is being a little too desperate and does not want to entertain that fraaandship request. But Preity accepts the request, behind her back. 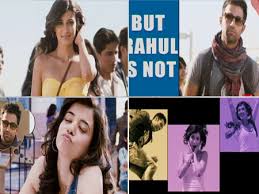 Vishal and Preity get chatty and spend time online. This of course leads to a lot of confusion, especially when they ask each other out on behalf of their friends, makes for a fun watch. And the college cat fights are also entertaining. It shows us how youtube and FB has taken over the college lives and how fast and easy the communication has gotten. Vishal, in his monologue towards the end, says that people become friends at the speed of mbps and break-ups happen at the flash of a logout. So, movies based on college life show everything but attending classes. Students while away their time clinging on to their cellphones and hangout in the cafeteria. Its not a canteen anymore, and there are no teachers!

The only teaching staff that we ever see is Mita Vasisht, who puts the students on a project for preparation of 25th anniversary celebrations. That’s the only backbone to the entire story of the movie. The dialogue and screenplay keeps the movie together. And a running time of just over 90 minutes does help, especially in this ADD generation.

Vishal and Preity share a love-hate-love relationship, as they don’t seem too fond of each other in the college campus. But their assignment is quite interesting and brings them together. In the future, I am sure that quite a few colleges are going to copy this idea for their anniversary celebrations.

Now, how this Fraaandship compares to Dosti is very interesting. While in 2002, TRP behaved like they were in the 1960’s, in 2011 the kids behave like they are in 2011! That’s the biggest difference. The dialogues have been written very well and the direction is spot-on. Nupur has done what Kunal could not do; she has extracted a good performance from the actors. Rahul Sareen was no Hrithik, but he did look and act like a college boy who takes a girl out to a sports-bar! Preity was not trying to out-do Rani Mukherjee, but her vulnerability and frustration were played out well. Malvika was no Kareena, but she was beautiful in her own way. Tara D’souza was good even in Mere Brother Ki Dulhan, will have to watch out for her. And Vishal was probably just being himself, funny and spiffy. I am sure all these actors will be seen in a movie soon, of course not in the same movie. But they all do have potential and will be cast by others too.

All in all, a nice watch; a very good timepass. I am impressed with Y-films and what Aditya Chopra is doing with it. His themes don’t change, the characters remain sane and predictable and yet the youthfulness shows through. I liked the way ‘Luv Ka The End’ was made; although it was a copy, it was done well. And now this. Y-Films is definitely able to feel the pulse of the audience and are giving them what they want. Sweet entertainers, youthful yet sensible, romantic yet not a tear-jerker, laughs and smiles yet not a no-brainer, old fashioned and yet in sync with times. Wish Fraaandship was spelt as Friendship, though!

Posted by crazyrals on October 25, 2011 in movie review, movies

The only modest Steve Job’s creation that I have possessed until this day is the iPod. But when I held that 8gb digital audio player, way back in 2006, I knew it was something awesome. The feeling gave me a rush of blood. After having used some cheap audio  players, the feel of this was heavenly.

And iPod was just the beginning of a digital revolution that Jobs embarked upon. When the phrase ‘music to the ears’ was coined, no one had envisaged that iPod would make it literally come true. Honestly speaking, some models of Creative and iRiver have better sound quality than iPod. But the very fact that iPod was the reason why Creative and iRiver was created, in itself is a tribute to Jobs. He was a voyager in search of new technology and finding new digital avenues to re-create or polish.

Had it been any other man, he would have happily retired and gone fishing by the Missouri for rest of their lives. But not Jobs. He followed up the iPhone with another electronic device called iPad.

This time, he combined an ebook reader with a web browser and sprinkled in all the  essential apps of a laptop; thereby making desktop and all library books redundant in just one go. The iPad became another object of desire. And credit must goto Jobs for paving the way for this.

All creations of nature is attributed to the supreme power up there, God. And closely looking into Jobs profile, we notice a similar trait. He created stuff out of nothing. He made paths were none existed and ventured into the less trodden digital wilderness. He shall be a guiding light for all of us. And his creations will entrall and continue to entertain us. And we will be appreciating his creations forever because he touched so many lives with technology in this digitised world. Just heard the news this morning, that Steve Jobs is on his new project called iGod.

Posted by crazyrals on October 6, 2011 in general, lifestyle